DANIEL BOONE AND THE REVOLUTIONARY WAR IN CENTRAL KENTUCKY

Thirty-five hearty souls gathered at the Embassy Suites hotel in Lexington, Kentucky on Thursday evening, October 31, 2019, for the “overview” lecture on “Daniel Boone and the Revolutionary War in Central Kentucky.” 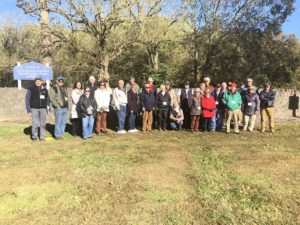 At 8:00 A.M. on Friday, November 1, the bus departed the hotel for the first day of the tour.  We drove along the old Harrodsburg Road where burr oak forests were seen as well as limestone formations and their sinking springs, all features of the landscape of central Kentucky Daniel Boone would have known.  Crossing the Kentucky River at Brooklyn Bridge, the giant limestone palisades of the Kentucky River captured everyone’s attention.  Appearing exactly like Daniel Boone saw them, those breathtaking palisades make the Kentucky River unlike any other river in America.  Once in Mercer County, the group saw the sites of Major Hugh McGary’s Station and Colonel Stephen Trigg’s Station, both of which contributed significant riflemen to the militia force at the Battle of Blue Licks.

Across from the site of Trigg’s Station, we walked to a back lot on private property to the site of a limestone cave and spring.  It was in that cave, according to testimony in the Lyman Draper manuscripts, that Daniel Boone spent some time while exploring central Kentucky all by himself in 1771.  Read to the group were Boone’s own reminiscences of his solitary year in Kentucky.  From Boone’s cave, we went to the site of Fort Harrod where the reconstructed fort was seen and readings from Boone’s reminiscences of the sieges of Fort Harrod and other nearby fortified stations were read.  Boone’s descriptions of the Indian sieges and the stealth attacks against the settlements in 1777 were gripping.

Traveling to Stanford, Kentucky, we went to the site of Logan’s Fort or St. Asaph’s Station.  That fort withstood horrific sieges in 1777 and 1778.  It was also the site where Daniel Boone, in the fall of 1778, was tried for treason but acquitted.  Too, it was the site where British Colonel Henry Hamilton, the “hair buyer,” was jailed after his capture by George Rogers Clark at Vincennes.  We then traveled to Berea, Kentucky for a fabulous lunch at the historic Boone Tavern.

After lunch, we traveled to the site of Boonesboro, the settlement founded by Daniel Boone and the Transylvania Company in April 1775.  In September 1778 Boonesboro survived a siege by the Shawnee and their French Canadian allies.  The siege was nine days long; it was the longest siege of any fort on the Kentucky frontier.  Boone’s reminiscences of his four day race over 160 miles from the Shawnee capitol at Old Chillicothe to Fort Boonesboro, the negotiations with the Shawnee in front of the fort, and the siege itself were read to the attendees. 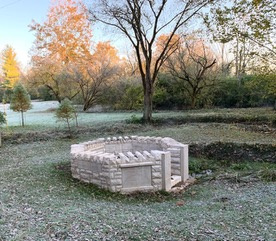 On Saturday, November 2, 2019, the bus left the hotel at 8:00 A.M. and journeyed to the absolutely gorgeous site of Bryan Station, east of Lexington, where Dr. William Wood let us onto his property.  The group walked to the site where the fort stood and then to the spring where all the women of the settlement walked to fill their “piggins” and “noggins” with precious water and returned to the fort, miraculously unharmed.  Thereafter, the Indians and their Tory allies attacked the fort, but had to lift the siege after two days because they could neither break into the fort nor force its surrender.  One of the attendees commented as he was leaving the site of Bryan Station: “It doesn’t get any better than this!”  He was right.  The site of Bryan Station is spectacular.

The bus took us to the site of the Battle of Blue Licks, fought after the siege of Bryan Station was lifted and the Indian and Tory force retreated to the Licking River.  There, we walked along the remnants of the great Buffalo Trace where the battle was fought, and heard readings from Boone’s reminiscences of the battle and the death of his son, Israel.  We then drove down to the bank of the Licking River where we viewed the site where Boone and the Kentucky militia re-crossed the river to escape the carnage.

Lunch was served at the Blue Licks State Resort Park’s Hidden Waters Restaurant.  After lunch we visited the site where Daniel Boone oversaw the burial of those Kentuckians killed at Blue Licks, and then everyone stood for a group photograph at the memorial to the Kentuckians who fought at Blue Licks. 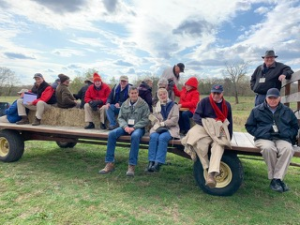 along the south fork of the Licking River.  There, the wonderful Darnells, the property owners, had two hay wagons ready, and took everyone to the monument to Hinkston’s and Ruddle’s Stations where they heard the story of the British and Indian siege of the fort and the massacre of the inhabitants after they surrendered.  They then heard the memoir of Daniel Trabue read, describing Captain Isaac Ruddle being reunited with his two sons who were captured at Ruddle’s Station and then raised by the Indians.  Everyone was taken to the Lair family vault in a cave above the river where the massacre victims were buried.  It has always been believed that Daniel Boone and Simon Kenton buried the victims of the massacre.

We boarded the bus and headed back to the Embassy Suites hotel, arriving at 5:30 P.M.  It was a fabulous tour!

Everyone on the tour was promised a reading list of the very best books about Daniel Boone and frontier Kentucky.  Here it is!  The books are arranged in order of importance:

John Filson, The Discovery, Settlement, and the Present State of Kentucky with the Adventures of Colonel Daniel Boone. Repressed Pub., 2014.

Peter Houston, A Sketch of the Life and Character of Daniel Boone. Lexington, University Press of Kentucky, 1997.

All of the above books are available on Amazon.com.

KET Supports the Mission of WHEF 2019, A BANNER YEAR!

Kentucky Educational Television continues its partnership with the Witnessing History Education Foundation and its production of three films on the American Revolution.

Witnessing History Education Foundation, Inc. names new members to the Board of Directors.